A bingo functions with the use of a randomly generated card, with each field being an objective to fulfill, within the context of the game. When an objective is fulfilled, that part of the card is checked. In order to win a normal bingo, the player has to fill in either an entire row, an entire column, or an entire diagonal line within the card.

Now you know about the typical bingo format, but in large part to mix things up and enjoy new experiences, runners have created various other forms of bingo. These include, but are not limited to:

The goal of blackout is to achieve every goal on the bingo card. Since this can often take a lot of time, however, most of these kinds of bingos will be done co-operatively.

Instead of reaching one complete line, the goal of a double bingo is to achieve 2 lines first, while a triple bingo’s goal is to reach 3 lines first.

The goal of lockout it to achieve 13 squares as quickly as possible. The gimmick, however, is that once a square has been obtained, the other player cannot obtain it, meaning they are “locked out”.

In lockout invasion bingo the players start marking goals on opposite sides and try to progress toward the opponents side. A goal can only be marked by one player and they can only mark as much goals as they have on the previous row/column on their side.

Runners begin by picking squares they would like to achieve, in a snake draft order. The snake draft is begun by one runner that picks one goal, then they alternate in picking 2 until all goals are picked. The goal of this bingo is to complete all picked squares before the opponent. Given the odd number of squares, the last goal is often not completed or completed by both players.

In quad bingo, or quadruple bingo, players have to get 4 rows/columns/diagonals with 5 goals each to finish. They may overlap.

In cinco bingo, players have to get 5 rows/columns/diagonals with 5 goals each to finish. They may overlap.

In Exploration Bingo all goals except 2 goals are hidden and can be revealed by completing adjacent goals.

In double anti bingo, each player selects a row/column/diagonal for their opponent and chooses an additional line for themselves to complete.

In Battleship bingo, each team places 2,3 and 4 square long battleships on the board, hidden from the other team, which may not overlap. Goal is to sink all of the other teams ships.

This should cover quite a few types of bingos that do exist, but do remember that possibilities are limitless! If you want to come up with your own rules, then you can go ahead and do it. Due to that, there are so many rulesets we can’t cover here, but those should give you a good idea of the most common ones you should encounter (as well as some special ones!).

How to play bingo yourself!

While some games require special setups, most of your bingo needs can be fulfilled using the website Bingosync.com, mainly created by kbuzsaki as well as many other contributors. You may find out more about all of that by going on the About page of Bingosync.

All you have to do is create a room, giving it a Room Name as well as a password if you want it to be private. Then, put your username, afterwhich you can then select which game you want to create a bingo card for in the dropdown menu (or create a custom card if your game isn’t there!). Then, select the type of bingo you want to play in the Mode dropdown menu, choose a seed if you want a specific one or leave blank if you want to leave it to randomness, then tick the appropriate boxes about creating as a spectator or hiding the card before starting, and you should be set to go! All you will need to do is send the room name and password to any other players you want to play with, and once you are in the room select your team colours, and you should be ready to go! 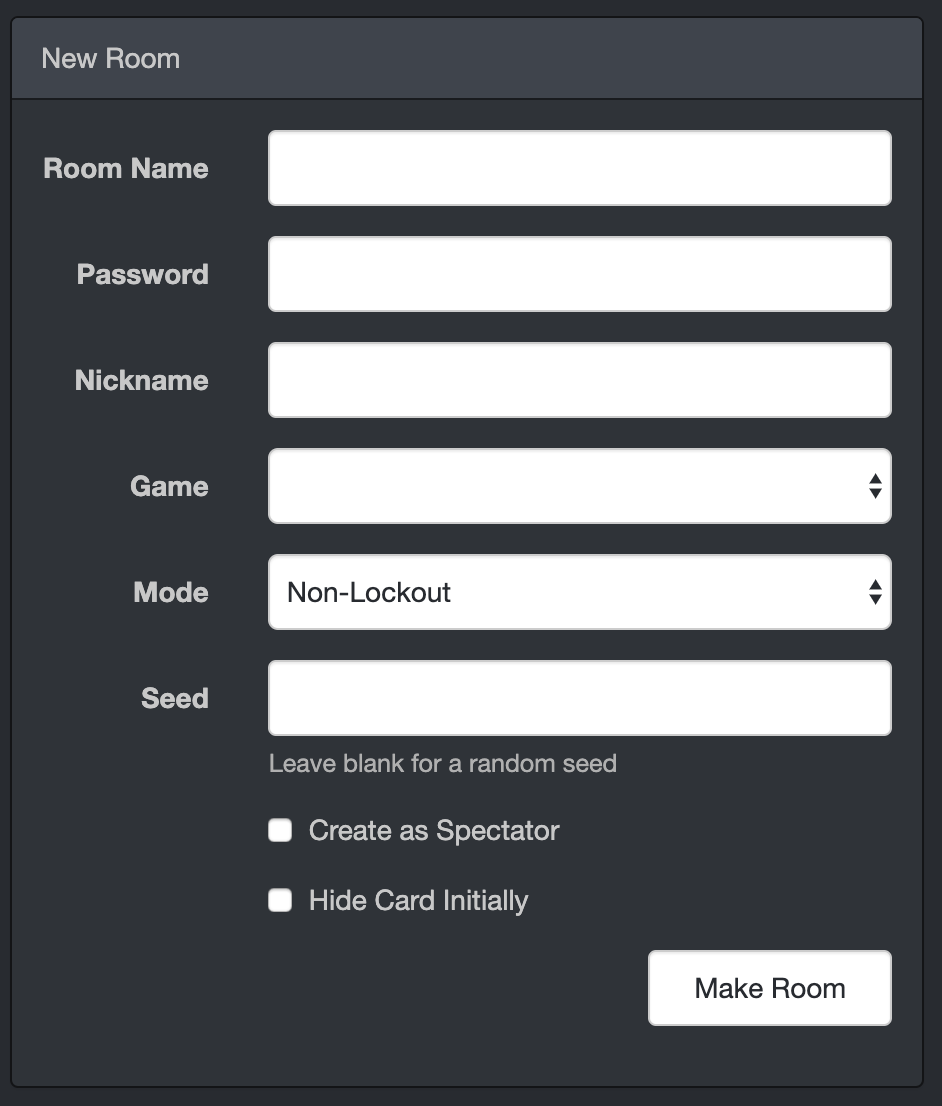